The Rivalry Between Ruger and Buju (BNXN) ,Omah lay and Victony

The Rivalry Between The New Generation Artistes; Ruger and Buju (BNXN), Omah lay and Victony. It was the 14th of July on a cold and calm Thursday night on Twitter. There, Ruger was answering questions on Twitter from his fans with the hashtag #AskRuger before a random Twitter user quoted his tweet with;" Lol BNXN is better than you and there’s nothing you can do about it you this low budget Samuel L Jackson"

But it seems Ruger wouldn't have it, then he replied to the tweet with; "I love Buju he’s good but he’s not better than me. Everything I’ve done since the beginning was only RUGER. All my hits are JUST RUGER. I’m always proud going on stage around the world with my own hits and everyone is singing along.You See The different. 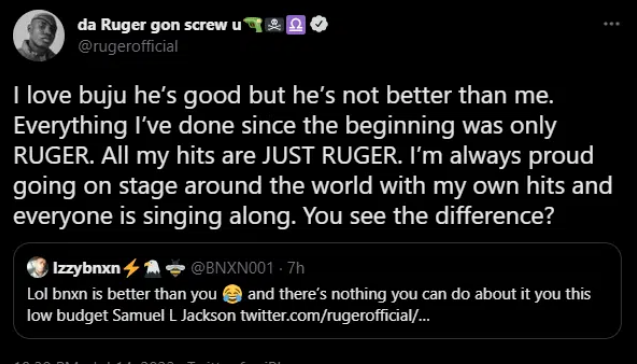 No doubt, This is a direct shot at Buju, popularly known as BNXN, who has fewer solo hits than Ruger. The violence started brewing with less noise before Omah Lay tweeted; "Ruger get mind dey talk about BNXN like that for this app smh!! mofos do anything for clout out here, same way Victony lol my tweet the other time, y’all are kids According to the tweet, it looks like Omahlay is supporting BNXN, while throwing direct shade at Ruger and subtle shades at Victony".

But How Did Rivalry Begin?

Stan's culture in Nigerian music grew out of the hostility between different feuding artists. But it wasn't until 2017 that the trend began to get ugly and slide toward being toxic. With Wizkid and Davido constantly tweeting subtle shades at each other, their fans would later troop in to join the battle, with Twitter as the battlefield. Both artists would later settle, but their fan groups haven't had it peaceful ever since.

Slowly, it grew from comparisons to awful tweets, cursing and raining insults about the artists' health, lifestyles, and sadly, their family.

Albeit, there has never been traces or insinuations of the daily expression of hate between the two fan blocs of Ruger and Buju (BNXN). There exists a video where both artists interacted and hugged each other with smiles on their faces.

However, examining the whole scenario closely, music enthusiasts will have their favourites. While it's possible to enjoy the music being dished out by the two artists and be neutral, pushing aside sentiments, your heart will tilt towards one more than the other. But this choice might not be influenced by the talent or artistry displayed in the tracks these artists release. It could be informed by the lifestyle exhibited by the artist which tends to be synonymous with yours.

Will This Rivalry Favour The Artistes?

It looks like a template being played by the new generation of artistes, to be the talk on Twitter, on the showbiz, and convert the PR to numbers. Nonetheless, While it's good for the artists since they are always on the trend list and in conversations — there's the potential that this might turn out to be ugly. Like FC/30BG/Outsiders moves — Everyday trolling, everyday hating, everyday downplaying the other artist's feats. There will be less collaboration between the artists involved in it, and if the collaboration happens, there will surely be pointless debates on the internet on who had the better verse or who didn't sing well in the song.

Do you think enabling the beef culture is a good development in the Nigeria Music Industry? Let's hear your thoughts.